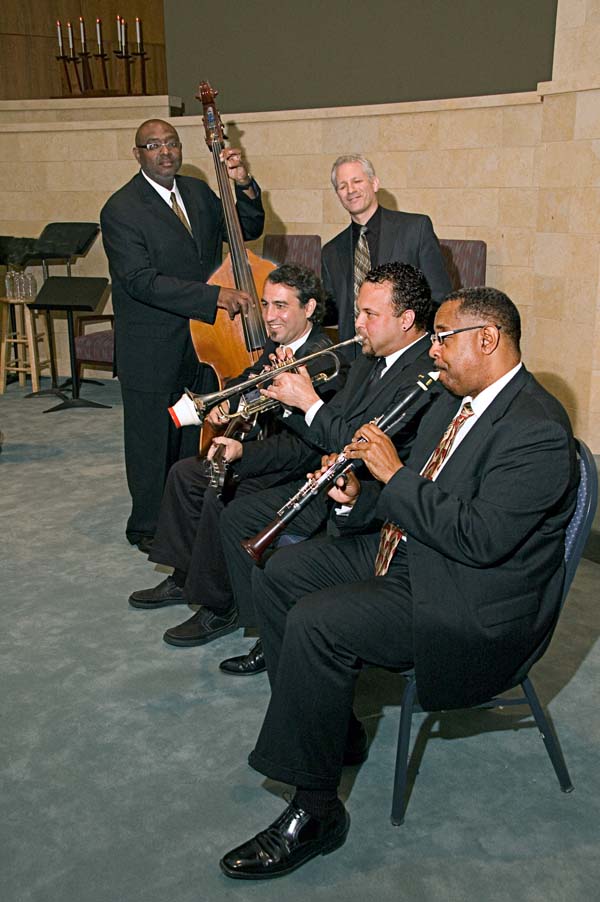 The one-hour Kentucky Homefront local radio show with host John Gage was taped at AJ before a live audience of 400 people on September 5, and featured the New Orleans famous “The Dr. Michael White Quartet” along with Harry Pickens and Cantor David Lipp.

Homefront features Kentucky’s finest acoustic folk, traditional, blues, country and bluegrass musicians and its best storytellers. Its front porch broadcasts are reminiscent of radio variety programs of a bygone era, and its mission is to preserve, promote and celebrate live grassroots music and storytelling traditions of the rich and diverse cultures of Kentucky and its surrounding states.

In 2005, AJ brought four New Orleans musicians displaced by Hurricane Katrina to play traditional classical New Orleans Jazz at their Selichot service. These nationally renowned musicians had fled their devastated city, leaving everything they owned including some of their instruments.

Businesses and organizations rallied to provide hotel accommodations and meals for the musicians. Mayor of Louisville, Jerry Abramson, presented the musicians with keys to the city.

Five years later, in 2010 AJ brought legendary clarinet player, Dr. Michael White and his quartet of world-renowned musicians back to Louisville to raise money for the Gulf region, still recovering from Katrina and, this year, dealing with the oil spill. Once again, the Louisville community supported the concert with donations and volunteers.

Along with the free concert was a reception with desserts from Sweet Surrender and Jan Weber and a Bourbon Tasting by Four Roses Distillery, Heaven Hill Distilleries, Maker’s Mark Distillery and Southern Comfort.

Donations for this event can still be made through a secure website, www.adathjeshurun.com/jazz.  All donations are tax deductible with the net proceeds going to The Gulf Oil Spill Fund, at the Greater New Orleans Foundation and the National Wildlife Federation’s “Gulf Oil Spill Restoration Fund”.

Miriam Godhelff restored and lent her late husband’s double bass for the event.