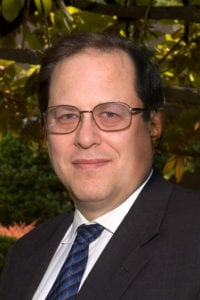 Adath Jeshurun will honor Rabbi Robert Slosberg for 35 years of service to the congregation on Saturday, November 26, during Shabbat services at 9:30 a.m. and followed by a special Kiddush lunch.

When Rabbi Slosberg tells the story of how he came to AJ, it sounds as if it was bashert – almost preordained.

“In the summer of 1979,” he said, “I was doing research for the Law Committee of the Conservative Movement and the head of the Rabbinical Assembly, Rabbi Wolf Kelman, told me, ‘I know where you will be rabbi next.’” Rather than tell Rabbi Slosberg what he was thinking, he wrote the information down on a piece of paper and sealed it in an envelope to be opened when the younger rabbi accepted the job.

Two years later, Rabbi Slosberg said, he met Karen Amick in Israel, and “she wanted me to interview for the job in Louisville. You have to meet Rabbi [Simcha] Kling.” He agreed to the interview, but really wanted to stay in New York and also arranged for an interview with the Forest Hills Jewish Center.

“I thought it was going to be a courtesy visit,” Rabbi Slosberg explained about his first trip to Louisville, “but I fell in love with the place.” Louisville was not “a bunch of horse farms” as he had imagined, but a beautiful place with many wonderful people.

“I was excited about the benefits of an intermediate city versus a big city,” he said. In trying to decide where he wanted to go, Rabbi Slosberg had put together a list of criteria, and Louisville met all but one – it didn’t have a professional sports team. It did, however, have University of Louisville football and basketball.

“I came back and told Deborah I really like the place,” he said. In the end, he backed out of the Forest Hills opportunity and interviewed at only one congregation. It was a good fit.

Originally from Cleveland, Rabbi Slosberg started down the path that led him to the rabbinate in the fifth grade. He became close to the assistant rabbi at his congregation, and the latter “roped me into going to Camp Ramah and roped me into Judaism. I decided around the eighth grade to become a rabbi.”

He was so committed to this path that he tried to apply to the Jewish Theological Seminary while he was still in high school. When he learned they require an undergraduate degree for admission, he undertook the Joint Program between Columbia University and JTS and then went to the JTS Rabbinical School.

Looking back over his career at Adath Jeshurun, Rabbi Slosberg identified many highlights, but perhaps the one accomplishment that stands out above the others is the help the congregation was able to render to Sudanese refugee, Gabriel Kwai.

“He was one of the Lost Boys of Sudan,” Rabbi Slosberg explained. He had been a speaker in conjunction with a concert at AJ, and during the reception after the concert, he asked Kwai how long his family had been in Louisville.

“He said his wife and daughter were still in Sudan and he had never even seen his daughter,” Rabbi Slosberg continued. “I said to him, in a year, your wife and daughter will be with you here. We raised the money and made it happen.”

Once Kwai’s family arrived, the congregation continued to help them. They arranged for his daughter and subsequent children, born in Louisville, to attend the AJ Preschool. They helped his wife get a job and helped him go back to school. Today, Kwai is an assistant manager of a nearby Kroger.

The congregation is now working to help a second Sudanese refugee. They’ve already raised the money and are waiting for the family to get through all the government red tape.

Other highlights Rabbi Slosberg mentioned are:

• Helping spearhead all aspects of the synagogue’s renovation, including fundraising, and rallying the congregation around the cause;

• Raising $130,000 for Unity Temple, now housed in AJ’s former home downtown, so that congregation could keep its doors open, and teaching its leadership how to raise money and how to budget;

• Raising $300,000 in two weeks for Eliahu Academy’s Save the School Campaign;

• Serving four years as chair of the Board of Albert A. List College, where Keneseth Israel’s Rabbi Michael Wolk attended;

• Serving as chair of the Board of the Masorti Foundation;

• Leading more than 30 trips to Israel for about 600 people from the congregation and the community;

• Bringing the Melton School back to Louisville with a new concept that now has gained national support, and a close partnership with the Jewish Heritage Fund for Excellence and the Jewish Community of Louisville to subsidize the program;

• Working with Rabbi Kling and Cantors Marshall Portnoy and David Lipp and the AJ staff members; and

• Building relationships with congregants, being with them from the birth of children to bar/bat mitzvah to marriage and the birth of grandchildren.

Rabbi Slosberg said he met his wife, Deborah, during the Yom Kippur War. She was a student at the University of Rochester and wanted to go to Israel. Her parents worked out a deal. If she didn’t go to Israel, she could go to JTS and Columbia and get her Jewish education degree.

Rabbi Slosberg was president of the student body at the time and was encouraged to help the new girl feel comfortable. He started tutoring her in Hebrew, then spilled coffee all over the work she had done. “Now, I make her coffee in the morning as penance,” he quipped.

The Slosbergs have three children. Their daughter, Aliza, is married to Stuart Weinstock and they have a newborn son, David Benjamin. The Slosbergs also have two sons, Jacob and Jeremy.

Rabbi Slosberg summed it all up, saying that serving as rabbi is like being married to the congregation. Those marriages don’t always work out, but he feels blessed because his “marriage” to Congregation Adath Jeshurun has lasted his entire career as a rabbi and promises to continue for years to come.

The recent visit to Budapest by a delegation of the Western Galilee’s Partnership2Gether’s (P2G) Medical Task Force has produced impressive results. “The impact has been immediate and much bigger than we could have imagined,” says Dr. Arie Eisenman, head of …

On Friday, November 4, The J weight rooms opened their doors to new workouts with a new look. More than 20 brand-new pieces of equipment, including 13 machines and numerous free-weights, replaced older models. Additionally, fresh flooring adds to the …