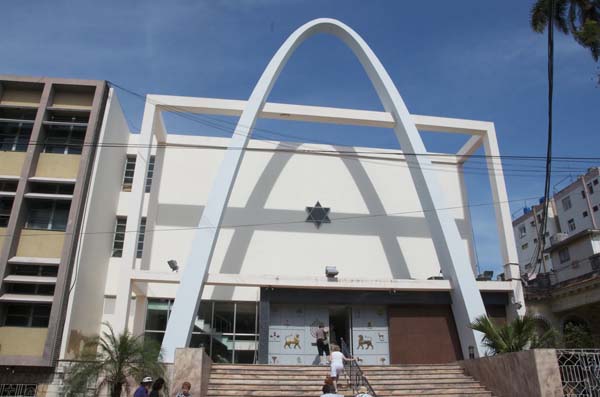 Twenty-six American Jews get on a Chinese-manufactured bus driven by a Spanish-speaking Cuban with a Moscow-educated guide…. No, this isn’t the beginning of an ethnic joke, but instead the start of a great adventure for Adath Jeshurun’s medical mission to Cuba led by Rabbi Robert and Deborah Slosberg.

“I put the trip together to educate us about Jewish life in Cuba and to give us the opportunity of doing the mitzvah of helping our fellow Jews,” explained Rabbi Slosberg. With much planning and the help of Cuba Travel Services, Inc., the tour came together.

The five-day trip began in Miami, FL, on March 10 as the group readied for our chartered flight on Sky King Airlines (a bit unnerving for those of us who remember Penny and the Songbird). While we were bringing medicines in our luggage, we noted that many travelers were hauling large screen television sets for their Cuban relatives. It’s a quick one hour flight to Havana’s Marti Airport and after a couple of hours of immigration and finding luggage, we boarded the bus to the Hotel Santa Isabel, which is located in the old city on the picturesque Plaza de Armes.

We were really able to experience the feel of Old Havana since we were staying at its center. As we walked through the area we could see that this city, founded in the 16th century, has a rich history and its buildings are a step into a glorious past. Unfortunately, many of these structures are now simply facades that are slowly crumbling away. The effects of sea air, age and neglect have caused the city to resemble an old movie set that hasn’t been used in decades.

The once vibrant Jewish population of Cuba is now down to 1,500 members. Eighty-five percent of the population lives in Havana and we were told that 99 percent of all young couples are intermarried, with 93 conversions to Judaism performed last year.

The greatest majority of the Jewish population are senior citizens who are served by three separate organizations. Adat Israel Orthodox Synagogue, whose leader is the kosher butcher in town, is located in Old Havana and serves a small community. Transportation to the center and daily meals, as well as medications, are offered to their members.

The economic conditions of Cuba make obtaining certain medications, including vitamins and nonprescription remedies, too expensive for the average retired citizen. Our contributions were greatly appreciated. We had a tour of the sanctuary that was completed just before the Castro takeover and is a beautiful example of midcentury modern architecture.

We next visited the Patronato Cuban Jewish Community Center, which serves the Conservative community in Cuba. With the help of a visiting rabbi from Chile, 12 educated women lead services and teach religious school classes to approximately 100 children there.

The leader of the center is a dynamic woman by the name of Adela Dworin. She has mobilized her community to educate and encourage the youth to participate in religious events. The teens of her congregation are participants of Birthright Israel and the March of the Living. They are hoping to send forty-four youths to the Maccabi games in Israel this summer with financial help from an owner of the New York Giants.

Adela was busy preparing for the upcoming Passover Seders for 150 participants each night. The Kosher foods are sent in from Canada.

The pharmaceutical services of this center are a major part of the wellbeing of their community. Rosa Behar, a retired gastroenterologist, runs the pharmacy that is well stocked with donations from many generous American and Canadian communities. Rosa’s daughter is currently a pharmacist in Lexington, KY, but Rosa has stayed in Havana for the opportunity to be of service to her people.

The first Sephardic synagogue was built in Havana in 1914 on Inquisition Street to serve mostly Turkish Jews who came to Cuba after WWI. The building lasted until 1995, when it was forced to close, and has reopened as the Sephardic Hebrew Center of Cuba in downtown Havana.

The original Bima was moved to its present location, which continues to operate as a Sephardic house of prayer. They hold Friday night and Saturday morning services for a small congregation of about 80 families and, like the other Jewish organizations, serve the elderly with breakfast, lunch and snacks. They hold education classes for seniors and also run an after-school tutoring program for neighborhood children. A gymnasium is rented out to produce income.

A trip to the Jewish cemetery was also part of our tour. Lillian Levy described our visit: “The Jewish Cemetery was very disturbing. The graves and headstones were in shambles. The Jewish community does not have the funds for repairs. Family members of the dead are either deceased or left the country. Jews take care of Jews and here is a situation where it has been impossible.” We were able to locate family graves of AJ member Debbie Winters and made sure that they were tended.

The countryside of Cuba is as beautiful as any Caribbean island. We visited the former home of Ernest Hemmingway and marveled at how well preserved his home and possessions are. It looked as if he had just stepped out for a walk. We also were able to spend the day at the village of Pinar Del Rio, which is an ecological preserve with restaurants and art studios.

We had adventures beyond the confines of this article, and any one of us would love to share our stories with you. Visiting with these Jewish communities has made all of us grateful that our parents and grandparents took that right turn and ended up in the United States.

With a large percentage of the young adults making aliyah to Israel, the future of Cuba’s Jewish community could be at jeopardy. Alan Levitan remarked, “Learning about the complications of life under such a government where the average Cuban earns only $20 a month,” was an eye opening experience. Yet there were “gorgeous flowers sprouting from crumbling ruins,” according to Elaine Stauble.

Shellie Benovitz summed up our experience by saying, “It was wonderful to meet with the leaders of the Jewish communities. I really admire their tenacity in keeping their communities going. Thanks again to Rabbi for enabling us to have such a meaningful experience.”

Outdoor pool opens for summer May 25 Lap swimmers are already enjoying the Outdoor Lap Pool, but soon the rest of the JCC outdoor pools will be open for families to enjoy. On Saturday, May 25, the Family and Seng …