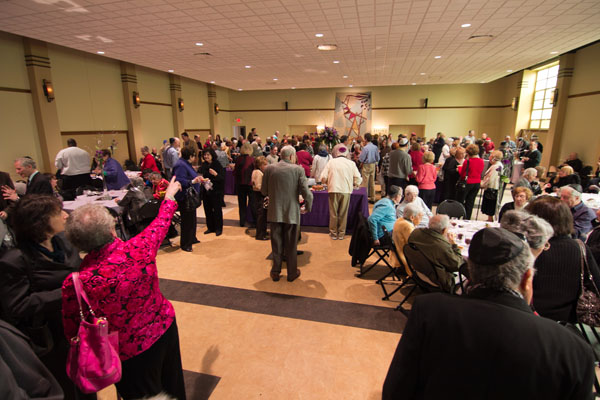 There was electricity in the air on Sunday, April 22, as the stars began arriving at Adath Jeshurun Congregation for the premier showing of the Ageless Wisdom: A Living Legacy documentary. The red carpet at the Oscars wasn’t more a-buzz than the entrance of Adath Jeshurun as greeters met and escorted the featured participants and their guests to their seats.

Janet Levitan, chairperson of the event, conceived of the idea to create this homage to the members of the congregation who are 80 years of age and older. She commented, “I knew from my parents and grandparents that there were rich stories waiting to be told. Creating the documentary allowed us to permanently record the memories of Adath Jeshurun’s older members, and gave us the opportunity to honor them for enriching our lives.” Levitan and her dedicated committee made this labor of love a reality to share with the community.

The documentary was professionally produced by Mike Kasbaum of Excelsior Video and enhanced by the music of Jonathan Wolff. The film highlighted these members’ memories of a time when trolleys ran on the streets of Louisville and Jewish soldiers stationed at Ft Knox became a part of our community. Life presented many challenges but they were taken in stride … “It was just part of life.”

The film recognized the important role these congregants played in the life of Adath Jeshurun and the role the synagogue played in their lives. It chronicled the changing times in the community, society and the world. It communicated how this, “our greatest generation,” survived, thrived and grew with the times. These members were long standing community families, merchants who moved to the city, Holocaust survivors and immigrants from Europe and South America. They wove a fabric that was strong, textured, vibrant and reflective of the Jewish community-at-large. They worked together to form the entity that is Adath Jeshurun today.

These members recalled the importance of friendships, family and community. They shared memories of Hebrew and Sunday school adventures and relationships with the rabbis and cantors who served the synagogue. They recalled courting sweethearts and marriages. They identified what they held as their accomplishments, but most pointedly, they shared how to live life with meaning and joy.

The reception committee, chaired by Sarah OKoon, presented a beautiful and delicious reception. Photos from the archives of Adath Jeshurun were part of the decorations, and members delightfully recalled when they were taken and what the occasion was as they carried them around to other tables to share with friends.

An estimated 300 people attend the event, which was free and open to the public. Each honoree received a personal copy of the documentary in appreciation of his/her participation.  One member remarked, “I thought this was going to be boring … but it wasn’t!” Another was heard to comment, “This is the best thing AJ has ever done!”  Yet another called it “a spectacular event that was both nostalgic and inspirational.”

This generation has provided a foundation upon which to build and envision AJ’s future. Our tradition teaches that we stand upon the shoulders of giants. We truly benefit from their experience and wisdom. Copies of the documentary are available at Adath Jeshurun for a donation of $15.

We are surrounded by messages that tell us how important it is to get regular exercise. With the best of intentions, many of us begin exercising, but soon find our commitment to the program difficult to maintain. The secret to …

[by Shiela Steinman Wallace] The Jewish Foundation of Louisville’s Annual Meeting on Tuesday, May 15, was a time of new beginnings. The meeting itself used a new format. In the first part, people who have endowments heard a report from …

In Louisville, our Jewish community is faced with a serious problem. Our Jewish agencies – the independent agencies including: Jewish Family & Career Services, Louisville Beit Sefer Yachad, The Temple Hebrew School, the Louisville Jewish Day School and the High …