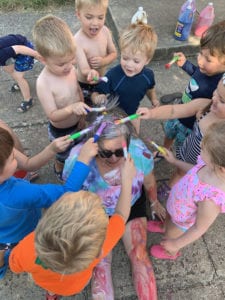 Norma Cahen not only taught the kids of The J’s Early Learning Center, she played with them, including letting them paint on her. (Community photo by Jessica Budnick)

When the kids of The J’s Early Learning Center (ELC) clamored into the lobby one Friday for Rosh Hashanah LaBehemot (the New Year for animals), they found Norma Cahen – dressed as a tiger.
Well, at least she was wearing a tiger-striped shirt, but that was good enough for the young ones who came dressed as their own favorite animals.
“We did Animal Action; it’s a song based on the actions of animals,” Cahen said. “Yes, I was silly and acted like an elephant, a monkey, a bird, a snake, blah blah blah.”
Nothing new for Cahen, the ELC director. In her five years on the job, she has dressed up like animals, allowed her young charges to paint on her, and just generally has had fun doing what she does.
Parents and teachers know her in more a serious way. She’s the one who developed written standards for ELC, put a curriculum in place, hired quality teachers and raised the reputation of the school.
Come January, though, children and grownups alike will have to get used to not having her around. Cahen is retiring on Dec. 20. She and her husband, Howie, are returning to Florida, where they plan to spend a lot of time with their grandchildren. (They already Facetime with them nightly.)
For Cahen, it will be her second retirement. Five years ago, the career educator hung it up at a South Florida preschool/day school. But she decided on a second stint after she learned of the opening at the Louisville ELC.
This time, though, she says she means it.
“Early childhood [education] is a field for young people,” the 66-year-old Cahen told Community. “I do things with pen and paper. The new people do it with computers.”
And with the Jewish Community of Louisville (JCL) moving closer to breaking ground on a new J at the back of the campus, Cahen decided now was the time to transition out.
“As we go into a modern building,” she said, “it’s time for Norma and Howie to go home.”
Cahen was hired to reorganize the ELC into a self-sustaining infrastructure that could withstand changes in staff and leadership – “a school that could stand on its own,” she said.
She put in place job descriptions for teachers, enrollment procedures, “Jewish” procedures (a must a for a Jewish pre-school where most of the kids are not Jewish), hiring practices and licensing and accreditation procedures.
She even built from scratch the ELC library, cataloguing every book.
Most important, she established a curriculum.
“There was no curriculum,” when she arrived, Cahen recalled. “Everyone did their own thing.”
The results of her work are reflected in the enrollment: 79 kids in ELC when Cahen was hired in 2015, 110 today.
Only 14 Jewish kids are enrolled, but Cahen said that is typical of moderate size Jewish communities, necessitating a director who can maintain the Jewish character of the school while teaching a non-Jewish student body.
And that’s what Cahen’s successor, Jessica Bush, is trained to do.
“Jessica has that innate ability to understand that this is a Jewish school for all children,” Cahen said.
Bush, who had been working in banking before coming to the ELC, approached Cahen, came to her after her hiring, expressing a desire for a more long-term position. Cahen tried her in the classroom, where she proved her leadership skills.
“Basically, everything I know about early childhood at all [she taught me],” Bush said. The Jewish values we teach, in early childhood are universal values …. She (Cahen) lives those values. You see them through the way she plans, the way she talks with families, the way we handle difficult situations with children and teachers.”
Cahen is confident Bush is ready to run the school.
“She’s got it,” Cahen said. “The only thing she needs now is to be on her own with a strong assistant director.”
Though she spent much of her time building infrastructure at ELC, Cahen continues to teach. She teaches the teachers skills they can use, and she teaches Judaics to the kids every Wednesday.
“Part of my role here is to guide, cheerlead, advocate, support, educate/teach, manage and lead the teachers,” she said. “This means that if I am willing to have the children put paint on me, then so should they. If I know the rules and regulations, then so should they.”
She said the school is in a “different place” than when she started here. “We can go into this new building with very high standards.”
And Cahen can retire – for the second time.
Or will she?
“Once I’m back home, I will decide if I want to spend my days watching the sun shine and the grass grow or if I return to teaching,” she said. “I really won’t know until I’m back soaking up the sun.”