How did I like Adath Jeshurun’s Annual Music Festival this year? Let me count the ways.

First off, Cantor David Lipp, the event’s impresario, broke his traditional liturgical Jewish music mold this year by including Jewish melodies into the concert, but giving top billing to the works of singer/songwriter and composer Zina Goldrich, who brought her great New York style and verve to the River City and wowed a crowd not quite sure what a program, entitled “Thoroughly Modern American Musical Melodies,” would hold. I think that element of surprise made the evening all the more intriguing and ultimately satisfying.

The program opened with an up-tempo version of Sim Shalom (a Hebrew prayer asking for peace, kindness and blessing) featuring the Jewish Community Choirs. Then everyone kind of settled back to enjoy the Jewish songs and prayers that put past music festivals on the map. It was not to be.

From the cantor’s introduction of Goldrich to the last song of the evening, there was never a lag or even a glance at your watch. She exuded talent and projected a warmth that made everyone in the audience feel that spending an evening with her would be the best ever use of their time.

The multi-talented Goldrich, also a composer, pianist and conductor, sat at the piano and noted that for the past 20 years, she has written songs for both on- and off-Broadway musical theater productions, the last nine with her lyricist and friend, Marcy Heisler. She set the mood by asking everyone to imagine they were in a living room in New York City, an intimate setting where she and other artists share their works-in-progress. Then she shared her songs with us.

Among the numbers was a hysterical piece called “Taylor the Latte Boy,” made famous by Kristin Chenoweth, about a young woman, thirsty for love, who enters a coffee shop and becomes captivated by an employee named Taylor. The lyrics “Bring me Java, Bring me Joy,” were both funny and a little sad too. In an interview, Goldrich has said that she and Heisler write in a way that allows people to create their own characters through the songs. So true.

While many of her quirkier tunes musically describe situations often found in a “Dear Abby” column, both the humorous and the more serious songs mostly involve love, whether seeking it, finding it or recovering from losing it. Her song, “Ever After,” was touching and the words were haunting: “Every time I have to say goodbye, I remember that love goes on. When two hearts are entwined like yours and mine, there is no such thing as gone, ever after, ever after, love goes on.” “Ever After” is from Goldrich’s current work, an adaptation of the 1998 film of the same name that aims to be on Broadway after premiering at New Jersey’s Papermill Playhouse in 2015.

“15 Pounds (Away From My Love, Baby),” tells the tale of a young fellow who warns a woman who is chasing after him that she is just 15 pounds too heavy to earn his love. She marries someone else, and his comeuppance comes when they meet again seven years later. In the interim, he has married a VERY thin woman and gained 72 pounds – and is now 50 pounds away from HER love!

Cantor Lipp assumed a charming French accent to sing a funny tune about RSVPing to a young man’s 10th birthday party and even performed a short can-can that drew hearty applause. On a personal note, Goldrich’s song, “Beautiful You,” was special to the cantor since he sang it for his wife, Rabbi Laura Metzger, during a special anniversary trip to Chicago. He sang another piece, “Over the Moon,” that perhaps he might have sung to his daughter when she was born, had she known it then. It cautioned her not to grow up too soon so he could have more time to enjoy her.

Cantor Sharon Hordes did a cute number about life: “When life gets your down, sometime you have to make your own party – sometimes you have to make your own band.” She played the perfect coquette and carried off the theme with aplomb. Her second offering, “Last Song,” amusingly described the angst of a long-suffering young woman who has a hard time letting go of her now-married ex-boyfriend.

The cantors joined Goldrich and the choirs for Adon Olam and peppy a Ein Keloheinu to end the program. The post-concert reception featured the to-die-for-desserts that continue to plague dieters attending the concert on an annual basis. Goldrich stuck around to chat and nosh and enjoy them as well. 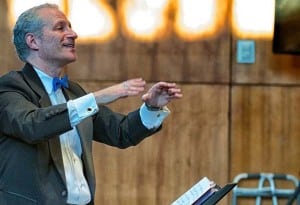 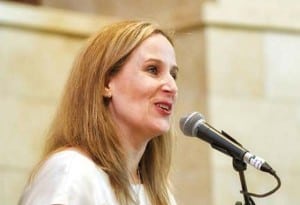 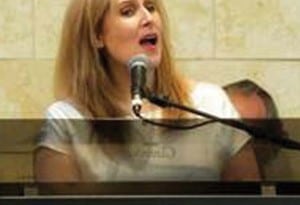 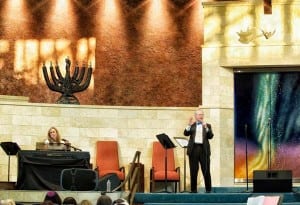 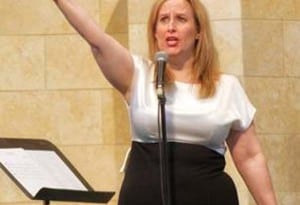 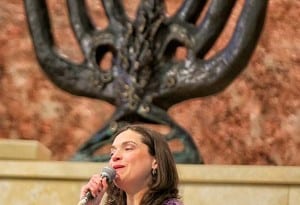 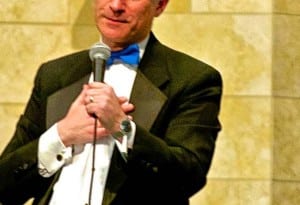 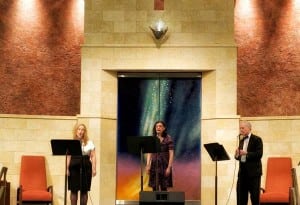 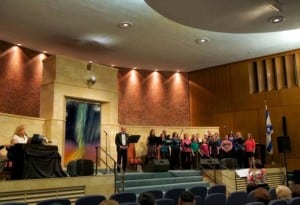 “Live From Shushan…It’s Saturday Night.” That was this year’s annual Keneseth Israel/Temple Shalom Purim play performed at Temple Shalom on Saturday evening, March 15. The original script, starring the Purim Players and written and directed  for the third year by …

Each year, the University of Louisville honors the memory of Professor Israel T. Naamani with a lecture bearing his name. This year, however, the lecture is an arts event that is designed to attract a wide audience. The 2014 Naamani …