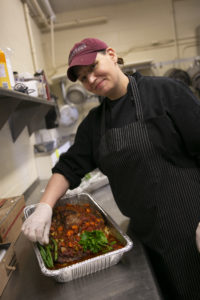 This past year, Chef Helen Impellizzeri has prepared a lot of meals.
A lot of meals.
To be precise, Impellizzeri, the Jewish Community Center chef, has prepared 21,201 meals for Meals on Wheels (MOW) alone since July 2020, beating her previous record of approximately 14,000, which she and a two-member staff set in 2019.
A lot of meals.
And she shattered that record alone – with no kitchen help.
“This is an amazing accomplishment,” said her supervisor, Dara Cohen, active adult and senior programming director at the JCC.
But for Impellizzeri, a career chef whose parents and grandparents were also in the food business, it is simply what she does.
“I come from a strong catering background, and I just took it on as my mission to help my community [and] make sure they had healthy meals and were taken care of.”
Still, it wasn’t easy.
Working without kitchen staff since July 2020, Impellizzeri has ordered all the food, made all the menus, prepared all the dishes, cleaned up the kitchen and packed the deliveries.
Often, at the height of the pandemic, she did it all in an eerily quiet JCC.
“I spent a lot of time in this building – maybe just me and the security guard – making meals,” she said. “It was a little bit of a hurdle to get over.”
But she feels a lot of “pride” in what she accomplished.
Impellizzeri comes by her love of cooking honestly.
Her grandfather was a grocer, her grandmother a culinary arts teacher, and she is a culinary science graduate from Sullivan University. She also is related to the founders of Impellizzeri’s Pizza.
But it was from her father, John Impellizzeri, a butcher, and her mother, Evelyn “Larri,” who ran the family deli, that she inherited her love for cooking.
She can still smell her mother’s matzah ball soup, simmering for the customers and her father’s New York-style cheesecake. (He also baked).
“Everything in the store was awesome,” Impellizzeri recalled.
After graduating from Sullivan, she became a chef manager at Kingsley Meats and Catering, and chef at Ciao Italian Ristorante in Irish Hill. She later worked at Stage Dining Services, which handles the food service at Louisville Collegiate.
She has appeared in Food and Dining magazine and Business Insider.
Looking back on the past year, when the number of MOW clients she served jumped from 35 to 95 daily, Impellizzeri said she never expected to make so many meals for as long as she did.
“Initially, we thought it would be few weeks,” she said. “Then it was a month and six months and it ended up being a year.
And a lot of meals.
“I feel pride that I was able to do it,” she said.

Human Relations Lee Chottiner As a pro-Israel Jew, it was gobsmacking to watch the … hmmm … meltdown in the Jewish world over news that Ben & Jerry’s will no longer sell its ice cream in Israeli settlements. Ben & …