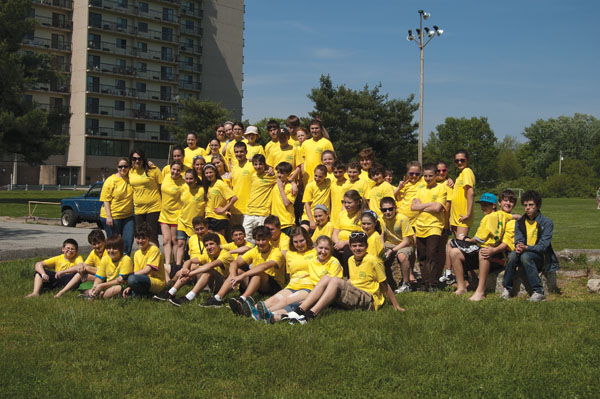 The Jewish Community of Louisville hosted the annual J-Serve event on April 15. This year, 65 6th-12th graders painted the Jewish Community Center’s gaga pit and halfway house, planted in the JCC’s garden, folded Kroger bags for Dare To Care, and cut and knotted blankets for the victims of the tornado in Henryville.

Many of the kids had a blast, not only helping the community, but also making new friends with other Jewish teens in Louisville.
Teen helper Max Strull said, “I had fun being with friends while doing community work to help those in need of it.”

J-Serve is an annual eve nt that brings together Jewish teens from all youth groups in Louisville for a common project, and the organizers hope to increase the teen involvement in helping our community. Be on the lookout for more JCL events to come!

Editor’s Note: The JCL received an $1,800 grant from BBYO for the J-Serve project, which allowed teens to participate in a variety of options during the event.

The event was carefully planned by a group of teens with the guidance from youth group advisors and parents. The teen committee – Rebecca Waller, Sadie Cohen, Natania Lipp and Jacob Spielberg – planned the activities, created the marketing pieces, designed the t-shirt and helped recruit other Jewish teens to come to the event.

The Conversation: A Novel by Joshua Golding. Urim Publications, Jerusalem. 527 pages. HB. $28.95. The Conversation is 527 pages long and reads much longer, which is its strength and weakness. It traces student David Goldstein, who begins as a not-very-devout …

Our Jewish community operates on a fiscal year. That means our Jewish agencies plan their budgets from July 1 through June 30 and rely on a successful Federation Annual Campaign to fund critical community programs. Jewish Family & Career Services …