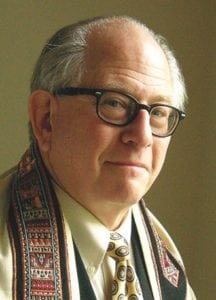 After 39 years of service to Temple Shalom, Rabbi Stanley Miles will be retiring on June 30. To honor him, the congregation invites the community to an open house reception on Sunday, June 19, from 2-4 p.m. at Temple Shalom. He will also be honored at services Friday, June 17, at 6:15 p.m.

Rabbi Miles grew up in Terre Haute, IN, and earned his A.B. from Indiana University in 1970, his Masters in Hebrew Letters from Hebrew Union College-Jewish Institute of Religion in Cincinnati in 1973, and he received his rabbinic ordination in 1975.

After spending three years at Temple Sinai in Lake Charles, LA, he came to Louisville to serve as rabbi of the then fledgling Temple Shalom on August 1, 1978.

“I fell in love with the Louisville Jewish community the first time I came to Louisville in 1968,” he said. “I hadn’t met Sheilah [Abramson, who later became his wife] at that point. I was like, so many others, a college student at the Derby.

“The next fall, I met Sheilah when she began her studies at Indiana University. I was a junior, really fell in love with what I’ve always considered to be a strong and full service Jewish community.”

“When the opportunity presented itself to come to Louisville and to become part of a new reform congregation, it was a given that this was path Sheilah and I wished to follow. We felt and still feel that Louisville is a great community and a wonderful place to rear Jewish children,” he said.

“When I arrived at Temple Shalom, there really wasn’t one,” Rabbi Miles quipped. “We were renting space for services and religious school at the Jewish Community Center. Services were held in Patio Gallery,” he recalled, which was and is an art gallery. At the first service he led, the congregation was surrounded by an exhibit of drawings of nudes.

“Before I came to Louisville,” he noted, “circumstances had prevented me from visiting the State of Israel. The class I was part of at the Hebrew Union College was a transitioning class between everyone doing the year in Israel and not, and I was part of a control group that did the first year class studies here in Cincinnati.

“The very first year I came to Louisville, the person who was the head of our Federation at the time, Norbert Freuhauf, made it possible for me to visit Israel for the very first time on a United Jewish Appeal Rabbinic Mission,” Rabbi Miles recounted. “And I am so grateful for that opportunity. That was an incredible mission. I was able to meet face-to-face with two men who are giants of Jewish history for totally different reasons, Yitzhak Rabin and then-Prime Minister Menachem Begin, both of blessed memory. This trip really gave me yet another sense of the greatness and the international reach of our Louisville Jewish community.

Since then, Rabbi Miles has visited Israel many times, often leading congregational missions. Through the Jewish Community of Louisville, he became involved with the Partnership2gether program through which Louisville and a consortium of American communities in the Central Region work closely with the Western Galilee. Rabbi Miles was instrumental in establishing and maintaining a sister congregation relationship with Emet V’Shalom, a reform congregation in Nahariya, Israel.

“In December of 2006, there were two community missions. On the first mission, there were 14 people and 10 of the 14 were members of Temple Shalom.

“Temple Shalom was really a journey,” Rabbi Miles observed. “My first study was an office in the Glendale Office Center on Taylorsville Road. In 1980, the congregation relocated to campus of Bellarmine and finally, in the summer of 1981, we purchased a house at 4220 Taylorsville Road, which we remodeled into our first synagogue. The house still stands. It’s once again a private home.

“On the first of August 1989, we opened the doors to our current location at 4615 Lowe Rd. It’s a wonderful and unique building, once again with very deep Louisville roots in that it was designed by Gerald Baron, who today is a member of our congregation,” he said.

“In fact, when you walk into our sanctuary and look at our bima, everything except chairs and flags, was designed and handcrafted by congregants – David Kling, Jack Silverman, z”l, Matt Karr, Barry Gallas, Connie and Randy Moser, Marie Rosenberg, Carol Savkovich, Esther Brown, Fran Kratzok and people who choose to remain anonymous,” Rabbi Miles said. “The same thing goes for the foyer. The existing culture at Temple Shalom is truly a mishpocha [a family] where so many of us simply roll up our sleeves and get things done, not for any kind of intrinsic reward other than just doing what God perceives a Kehila Kedosha should do.

In recent years, the congregation has also developed a strong relationship with Hebrew Union College, employing rabbinical students as interns. Rabbi Miles has served as mentor for several interns and his strong program for them has earned Temple Shalom an excellent reputation among the students.

Rabbi Miles appreciates the cooperation he sees among the congregations, particularly in the area of religious education where he believes Louisville’s transdenominational programs are ahead of the national curve.

He has taught at the Louisville Hebrew School and its successor, Louisville Beit Sefer Yachad as well as the High School of Jewish Studies and the Florence Melton School of Adult Jewish Learning and even Eliahu Academy. He also established the New York trip for eighth grade LBSY students.

“When I was growing up in Terre Haute,” he explained, “all of my friends who belonged to the Indianapolis Hebrew Congregation did a Confirmation Shabbat in New York. I was jealous.

When he came to Louisville, he presented the idea to the Hebrew School Board as a way to keep children in class post-bar/bat mitzvah. “Beginning in June of 1981,” he said, “with the exception of one, we have gone to New York every single year as an eighth grade experience.

In 1985, when Temple Shalom began to have yearly Confirmation classes, he expanded this program to offer a Shabbat encounter for the confirmands, “giving our students the opportunity to worship in some of the great synagogues in the world, Temple Emanu-El, Central Synagogue and B’nai Jeshurun,” he added. This gives young people from Louisville a chance to connect with American Jewish history and the largest Jewish community in the world.

During Rabbi Miles’ tenure, the congregation instituted a regular Shabbat morning service and transitioned through liturgical changes, along with most of the Reform Movement from Gates of Prayer and Gates of Repentance to Mishkan Tifillah and Mishkan Hanefesh.

When he first arrived in Louisville, Rabbi Miles was active with a local Anti-Defamation League chapter, and later he became active with the Jewish Community Relations Council. “One of the greatest honors that I had in my years of working here in Louisville,” he said, “was to serve as chairperson of the Jewish Community Relations Council during the early 1990’s and to see the respect nationally that our JCRC had, respect well-earned because of people the likes of Lewis Cole, may God rest his soul.”

Rabbi Miles is an active member of the Louisville Board of Rabbis and Cantors and has served as the group’s president in rotation with the other members. He has also served on many Jewish community committees and participated in many Yom HaShoah and other communal programs.

He was a member of the leadership Louisville class of 1990 and served on the Louisville/Jefferson County Human Relations Commission as well as the Boards of the Louisville Science Center and the Broadway Series.

In retirement, Rabbi Miles plans to expand his teaching in the Melton program and will attend a seminar to enhance his skills in that program this summer. He has already joined the Board of CenterStage and is looking forward to expanding his role there. He will also continue to be active with the JCRC, Interfaith Paths to Peace, the clergy advisory board of the WHAS Crusade for Children and on the TV show, “The Moral Side of the News.”

His wife, Sheilah Abramson-Miles, is also retiring and has become active with the Women of Reform Judaism regionally and nationally. At the WRJ convention in Louisville in November, she will become president of the Central District. In that capacity, she will travel to 36 congregations in Kentucky, Tennessee, Indiana, Ohio, West Virginia and Michigan. Rabbi Miles plans to travel with her.

He is also looking forward to attending services as a congregant and spending more time with his children and grandchildren.

“I am so thankful to God that I’ve been able to spend over 90 percent of my rabbinate in this wonderful Jewish community at an incredibly nurturing congregation,” he concluded, and to “those souls who help us on the journey.”

The United States, Pakistan, Afghanistan, Iraq, Eritrea/Ethiopia, Rwanda and Cuba were countries represented when 20 students traveled with The J to the United States Holocaust Memorial Museum in Washington, D.C., on Sunday, May 1. For the past 20 years, The …

Each year’s Yom HaShoah community-wide Holocaust commemoration program is special in its own way. While each inspires awe and reverence, this year’s program provided an educational component as well that made the familiar feel new again. This year’s Jewish Community …