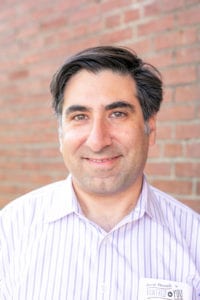 2020 Federation Annual Campaign Ambassador, Corey Shapiro is a member of the Jewish Community Relations Council, board member for Jewish Family and Career Services Center and a proud parent of two PJ Library daughters. Corey’s first involvement with the Federation was through PJ Library. His family was greatly involved in PJ programming in Chicago, and when they moved to Louisville, wanted to find a similar community. His family received a warm welcome from the Jewish community of Louisville and gradually became more involved in the Louisville Jewish community.

PJ library is an important part of the family. It’s great to have books that teach children about Jewish culture and the importance of a maintaining a Jewish household. These stories are so wonderfully geared toward teaching and making Judaism apart of their everyday life. When his children were younger, they didn’t belong to a synagogue and this was the exposure they had to Judaism on a regular basis and has given them foundation of Jewish life.

Corey, believes that being an ambassador is an opportunity for him to give back and promote the Federation for all the work it does. He credits the Federation for the diverse, varied and critical work that it does, whether through PJ Library, JFCS, JCRC or one of the many other ways the Federation impacts the Jewish community.