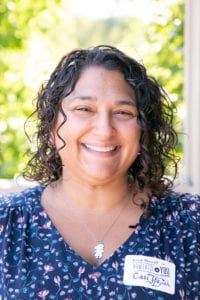 Cari Hatch grew up with grandparents giving everything that they have to the community and the city of Louisville. At 6 years old, she and her mother left Louisville and didn’t return until Cari graduated college. Although, Cari didn’t have the opportunity to be involved in youth groups or birth right like many other Jewish teens, the Federation’s Momentum trip gave Cari the opportunity to go to Israel for the first time at age 39. Cari found the trip to be enlightening and invigorating; 10 days of bonding and discovery with 19 other women from Louisville – an experience that left her, more appreciative to who she is. Cari got so much out of going to Israel and feels she can’t ever repay the Federation for that opportunity, so she does what she can to give back.