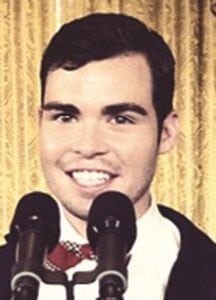 Pugh is a newcomer to Louisville, so he didn’t realize that there was an award to recognize young leaders in the community relations field. He is pleased to receive it and that it demonstrates the community’s commitment to the future.

Originally from Cincinnati, he earned a degree in chemistry from Beloit College in Wisconsin. He pursued medical school and in the process lived for a year in Singapore and a year in Denmark.

He was drawn into politics in Washington, D.C., when he was recruited by the Roosevelt Institute to work on the White House for the Affordable Care Act. He quickly learned that “policy can affect people much more broadly than treating them one at a time.”

He found his four years in the nation’s capital exciting, and while there, he completed a graduate in public policy in the School of Professional and Extended Studies at American University.

Pugh is a communications and public relations professional with a knack for developing strategies and influencing target audiences. He has created and executed issue advocacy and candidate campaigns, ran a Super PAC and led movements from the bottom up as a community organizer.

As a campaign consultant, Derek provides relationship management, tactical strategy and campaign and program development to clients in the non-profit and private sectors, including the Chamber of Commerce, American Cancer Society and NextGen Climate. Previously, he analyzed, developed and advocated for legislative solutions to challenges facing America’s economy in Washington, DC. His research has been published by several think tanks, and his work has been featured on numerous media outlets.

When Pugh moved to Louisville in 2014, one of the first organizations he joined was The J, and as he met more Jewish people, he got more involved. He met Jewish Community Relations Director and Development Director Matt Goldberg at a YAD Seder at The Temple. “He told me about things happening in the community and about the Jewish Community Relations Council how it affects all aspects of Jewish life in Louisville.”

“It’s something I wanted to see flourish,” he said, “because my Jewish identity is very important to me, and I would like to see a more active Jewish community, especially among younger people.” For example, Pugh was on a kickball team called the Matzah Balls in D.C., and he’d like to see similar activities here.

Since joining the JCRC a year ago, he has become an active member of the Yom HaShoah, Social Justice and Policy Committees.

One of the things he appreciates the most about the JCRC is that it brings to the table people with such diverse views. He has learned that sometimes he agrees with one group and sometimes another, depending upon the topic. “People have more in common than they have differences,” he observed, “and that is nice and refreshing.”

Pugh has also stepped up as a YAD Ambassador to help engage the next generation of young Jewish leaders.

Last summer, he traveled to Israel over the summer and stayed an extra month to tour Europe, focusing on Eastern Europe, especially Hungary. As he learned about Jewish culture there, and his interest in the Holocaust was piqued. Back in Louisville, he discovered that Kentucky is one of the only states that does not have a Holocaust memorial. He is working with a committee locally to develop one that includes an educational component.

Pugh’s interest in the next generation of Jewish leaders extends to teens as well. In February, he presented a panel discussion on The Importance of Civic Engagement at the BBYO International Convention in Baltimore.

In his spare time he enjoys outdoor activities and volunteering on the alumni committee of the Roosevelt Institute and the Democratic National Committee’s first LGBTQ advisory board.

Julie E. Linker was a young leader in the Louisville Jewish community with a passion for community relations work. When she died, the Julie E. Linker Community Relations Young Leadership Award was established to perpetuate her name, to encourage young people who share her passion and to give them the opportunity to attend the Jewish Council for Public Affairs Annual Conference.

The Torah describes two models of leadership: Moses and Aaron. Moses’ leadership was stern and unyielding. The First Chief Rabbi of Israel, Rav Kook, stated that he lived “a life detached from the mundane concerns of the common man.” For …

“You don’t see any tears but they are inside.” Happy tears that is. That’s what one thankful man said when Dr. Diane Afoumado found his original birth certificate from the concentration camp where he was born. Every day, every second …