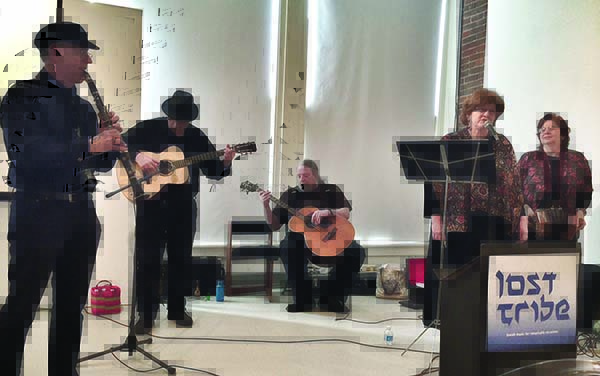 Those who arrived on Sunday, April 13, at the Kentucky Museum of Art and Craft anticipating the annual academic lecture were in for a surprise. This year’s Naamani Lecture was a show. Who knew?

Kentoki: Kentucky Through Jewish Eyes is a book-length epic poem written in the 1920s by I.J. Schwartz, a Jewish immigrant from Lithuania. Schwartz took his lyrical inspiration from his literary idol, Walt Whitman, but he composed his work in Yiddish. Kentoki is the semi-autobiographical account of a young Lithuanian Jew, Joshua, who immigrates to America, settles in Kentucky, makes a good living as a merchant, raises a family, grows old, and ultimately, looks back on how his life has changed and how it remained constant over the decades.

Shelley Salamensky, professor of Global Humanities at the University of Louisville, received a copy of the poem from Yiddish scholar Edward Portnoy when he learned she was leaving UCLA for Louisville. She says she fell in love with the poem, just as its author had fallen in love with Kentucky’s landscape and people; she describes it as “Fiddler on the Roof meets Little House on the Prairie.”

As she settled in at U of L and learned about the Naamani Lecture, Salamensky returned to the poem. Her doctorate is in literature, and she has experience in directing theater; Kentoki, she believed, could become the centerpiece of a discussion of the Jewish immigrant experience in middle America. She approached the Naamani committee with her idea to blend readings, music, and scholarly commentary into a performance that would interest more than the academic community.

Although she auditioned professional actors for the readings, Salamensky’s ultimate choice was James Rose, a doctoral student whom she asked to audition because he looked the part of Josh, with his flannel shirt and beard. His audition reflected immediate understanding of the poem and of Schwartz’s love of the land, and the role was set. She asked Merle Bachman, a Louisville poet and Yiddish literature expert, to read the Yiddish sections of the performance.

The show was held on KMAC’s second floor, in a display hall that was nearly full. Although the event was free, reservations were recommended, and seats “sold out” well in advance. The crowd ranged from graduate students to older members of the Jewish community, several of whom appeared to engage more with the Yiddish portions of the readings than with the English.

The performance opened with a set by Lost Tribe, a Louisville band that bills itself as a combination of klezmer and bluegrass – the perfect music for a show about an Eastern European Jewish immigrant to Kentucky. Coincidentally, one of the members of Lost Tribe is Aviv Naamani, the son of Dr. Israel T. Naamani, in whose memory the lecture series was created. The audience was captivated – swaying to the music, toes tapping; the only thing missing was a dance floor.

Rose and Bachman took turns reading from Kentoki, she in Yiddish and he in English, beginning with the touching account of Josh’s leave-taking from his home, knowing he would never see his parents again. Even for those in the audience who only caught a word or two here and there, the Yiddish readings added depth of feeling, a new cadence, and a bright thread of words that tied the English sections together.

We heard heartbreak in the desolation of his dreams as he spends the night in a stranger’s barn and both relief and resolve to make this adventure work as he wakes to a Kentucky sunrise and the realization of freedom. Later events – marriage, the loss of a child, other changes in family relationships, and a warm, surprising friendship in old age – were recounted in equally powerful language.

The poem is descriptive of not only nature and geography, but of emotion; Whitman’s influence is quite clear, and we were left wanting to know more. To that end, Dr. Salamensky said that a translation by Gertrude Dubrovsky is available used on Amazon, and the Jefferson County Free Public Library also has two copies; to find them, go online to tinyurl.com/I5o9rgm.

The reading was followed by a brief lecture by Dov-Ber Kerler, the Dr. Alice Field Cohn Chair of Yiddish Studies at Indiana University. Dr. Kerler is the son of dissident Russian poet Josef Kerler, and is also a poet who writes in Yiddish.

He discussed the influence of Walt Whitman on Schwartz’s writing and contrasted the traditional Yiddish poetic structure to the freer form of Whitman’s style. He also drew comparisons to Longfellow’s lyrical epic Hiawatha, which has been translated into Yiddish; he read brief excerpts in Yiddish, emphasizing the ease with which the poetic structure translates.

The show closed with another set from Lost Tribe.

Taken all together, the 2014 Naamani Lecture was more than either a lecture or a performance – it was a celebration of klezmer and bluegrass, of “Fiddler on the Prairie,” of tradition and of Jewish identity both reconstructed and reclaimed. In the end, Schwartz concluded that his Kentucky was, “If not the Promised Land of the Covenant, a fresh new land of promise.”

In a final word to the gathering, Salamensky noted that an outcome of the collaboration among the Naamani team and the KMAC was the formation of “Biscuits and Lox,” a group that has plans for continued programming related to Jewish culture in the heartland. The next event is a lecture and workshop by cartoonist Ben Katchor on Sunday, April 27, beginning at 1 p.m. 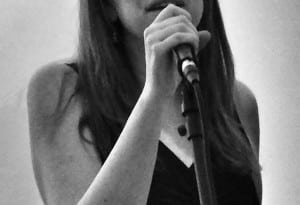 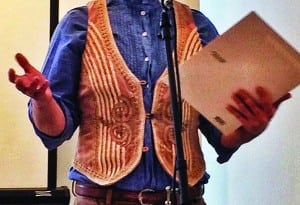 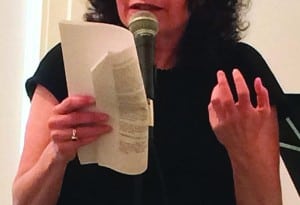 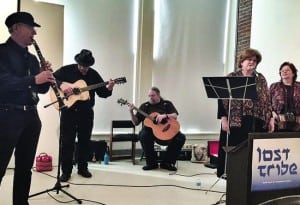 On April 9th, the JCC Senior Department and Louisville Beit Sefer Yachad joined together for the annual Intergenerational Interfaith Model Seder. This year was the biggest celebration in the program’s history, more than 75 people gathered for a delicious seder. …

The Zimmerman family has established the Zimmerman Family Summer Fun Fund in memory of Eddie Zimmerman, a beloved and respected member of our community who died in 2005. This fund will help to provide a few fun camp essentials – …

For its last production in a season of unprecedented success, CenterStage at the JCC brings the beloved family classic The Sound of Music to the Linker Auditorium, 3600 Dutchmans Ln., May 8-18. The show promises to capture the magic of …