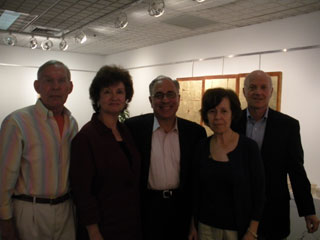 For the past 12 years, the Goldstein/Leibson Scholar-in-Residence program begun by Nicole and David Goldstein and Phyllis and David Leibson has brought noted speakers to Louisville’s Jewish community. This year’s scholar, Rabbi Norman Cohen, addressed an overflow crowd in the Patio Gallery at the Jewish Community Center on Monday, May 17, in what turned out to be a meeting steeped in Jewish learning with a liberal dose of stand-up comedy thrown in for effect.

The rabbi, a former dean of Hebrew Union College-Jewish Institute of Religion in New York, also teaches and is a renowned expert on Midrash – commentaries on stories from biblical texts. In his introduction of Rabbi Cohen, Rabbi David Ariel-Joel, who was a student at the seminary during Cohen’s reign, commented on his mentor’s “amazing ability to make biblical issues relevant to today.”

The speaker’s warmth, sense of humor and vast store of knowledge made his presentation on biblical education not only palatable, but downright interesting and appealing to a rather diverse audience.

He began his remarks by telling a story about the modern Orthodox home in which he was raised and about the influence his paternal grandfather had on his life. Each Shabbat his grandfather took “Normie” to shul so he could take part in the afternoon Torah study that followed services. My grandfather, he said, “was radiant with the knowledge of Torah, and I also wanted that feeling.”

Cohen believes Torah is the basis of all learning in that it allows itself to reach out to us wherever we are as human being. The path to understanding Torah, he contends, is through midrash; midrash forms who we are as Jews. Studying midrash follows a set protocol: you first recite a blessing thanking God for allowing you to study midrash and then you immerse yourself in the text. To study effectively, you should not speed read the content, but take in every word. You also must ask every question – even the most difficult ones.

He illustrated his point by using the biblical text about the life story of Abraham and asked audience members why they thought God commanded Abraham and his family to leave the city of Ur and travel to the land of Canaan some 1500-1800 miles away? And why did the family stop at the half way point in their travels and settle down in the city of Haran? Why did God then command Abraham to take his wife and nephew and go to a land God would tell him about later and settle there?
Questions and answers were traded for about 90 minutes and still the audience asked for more.

Probably the most hotly debated issue of the evening concerned Abraham’s tremendous faith in God, a faith not shaken even when God commanded Abraham to sacrifice his only son, Isaac. Rabbi Cohen skillfully turned the story of Abraham into a contemporary discussion about how each of us handles separation from loved ones whether through death or through coming of age moments such as when our children leave us to go to kindergarten, to college or to get married – and how we and they cope with the change in situation.

If you enjoy this kind of program, you can ensure its future by contributing to one of the Goldstein/Leibson Scholar-in-Residence endowment funds. For more information or to make a donation, click here or call 451-8840.