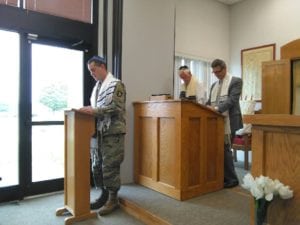 A 2016 Yom Kippur service at Fort Campbell. The Mize family, which has served as lay leaders for the Jewish community at the installation since 1999, was dismissed without cause in February, prompting the Army to investigate. (photo provided by Jeanette Mize)

(Editor’s note: This is a revised version of an earlier story that contains new information and art.)

For 19 years, Jeanette, Curt and Lawrence Mize of Clarksville, Tennessee, have conducted Shabbat and holiday services for Jewish servicemen and their families across the state line at Fort Campbell, Kentucky.
All that came to an end on February 28, when the Mizes, then the designated lay Jewish leaders for the installation, learned they were being “terminated” without cause, according to the family. Their last official day was March 5.
Fort Campbell is home to the 101st Airborne Division. The base has no Jewish chaplain and the nearest synagogue is in Nashville — about 50 miles away.
For Jeannette Mize, the termination is the culmination of a stormy relationship with the division chaplain, Col. John Murphy, and the deputy chaplain, Lt. Col. Sean Wead, that involved bullying and threats.
“It’s just been very difficult all year long,” she told Community. “I just felt I haven’t had the support. I had to go begging money for the cantor who was coming in for High Holy Days.
I’ve been bullied and threatened. Communication has been cut off. Exposure to other faith groups and chaplains has been limited.”
The Army is investigating. It has appointed an officer to conduct the probe, who has already been in touch with Mize. JTA reported that U.S. Rep. Eliot Engel, D-New York, has urged Secretary of Defense James Mattis to ensure that the investigation is completed.
Michael L. “Mikey” Weinstein, founder and president of the Military Religious Freedom Foundation (MRFF), the Mizes’ civil rights advocate, said they are victims of “old school classic anti-Semitism by fundamentalist Christians.”
He is calling for the reinstatement of the Mizes and for all those responsible for their dismissal to be “visibly and aggressively punished.”
The MRFF is a watchdog group dedicated to separation of church and state in the military.
Mize said the chaplains had never complained about the way she, her husband and son have conducted services.
“They never talked to me about anything that was incorrect or needed to be changed,” she said, “or that they were concerned about or unhappy about.”
Fort Campbell’s director of public affairs, Robert N. Jenkins said the chaplains have been deployed and will not be available for comment. He said a new lay leader has volunteered, but must first be certified.
In a statement to the Army Times and The Tennessean, Jenkins said a visiting Jewish chaplain from the Army Reserve held a Passover seder in March. Mize called that service a model seder, saying it was held on March 28 – two days before Passover – and does not fulfill the religious obligation of Jewish soldiers and their families.
The Mize family has a long history at Fort Campbell. Her grandparents, Latvian Jews, settled in Clarksville in 1896, opening a scrap business that still operates. Her husband, Curt, is a 101st Airborne veteran of the Vietnam conflict. They have worshipped on the base since 1984, and their son, Lawrence, who became a bar mitzvah in 1996, chants the Hebrew for the services.
The family has led services at Fort Campbell since 1999, their last being for Shabbat and Purim on March 2.
“We’re a family and we’re all working with the Jewish soldiers and their families to give them outstanding programs,” she said. “They’re just amazed at all that’s available for them at Fort Campbell.”
In addition to the investigator, Weinstein said he has been in touch with the chiefs of staff, both deployed and in the “rear” (on the base) about the case.
“Right now, we’re happy with what the Army is doing,” Weinstein said, “but it’s our job to make sure they do their job thoroughly and expeditiously.”
He called upon Jewish organizations and those of other faith groups to support the Mizes and “keep the heat” on the Army.
Jackie Jacobs, chief executive officer of The Columbus (Ohio) Jewish Foundation and Mark S. Freedman, executive director of the Jewish Federation of Nashville and Middle Tennessee, have both issued statements in support of the Mizes. The Jewish Community Relations Council in Louisville also came out in support of the family.