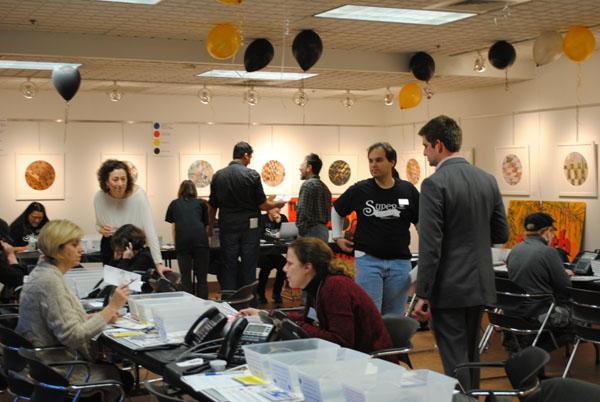 On Sunday, February 17, the red carpet at the Jewish Community Center led to the Patio Gallery, which was buzzing with activity as Super Sunday volunteers called donors to the Annual Federation Campaign asking for their commitments for 2013.

“Super Sunday was a great success,” said Sarah Harlan, who chaired this year’s telethon. “There was a great amount of energy in the room and lots of enthusiasm from the volunteers.”

Harlan also noted that “we were getting good comments from members of the community when we called them” and she was pleased with the way things went.

This year’s Super Sunday was a big Pre-Oscar party. The room was decorated with balloons and posters promoting plays CenterStage will bring to the JCC in the 2013-14 season. The tote board was a series of shining stars.

Volunteers could also snack on candy from large theater-style boxes as they made calls or indulge in donuts, bagels, tuna, pasta salad, baked goods and more when they took a break and walked over to the Naamani Library. And of course, there were plenty of prizes for those who secured significant increases in pledges and new gifts to the Campaign.

SCHOOLHOUSE ROCK LIVE! This pop culture phenomenon is energizing audiences of all ages! A public performance will be held at the JCC on Sunday, May 19 at 12:30 p.m. Tickets are $10 for kids and $15 for adults. Tickets …

Starting March 4, the JCC of Louisville new policies will go into place to upgrade the security of the building. The JCC will move to a ONE ENTRY/ONE EXIT system. Everyone, everyday of the week, will use the main doors …